The new is simply the past, tweaked. Mexico is made up of a rich weave of cultures — Indigenous, Spanish, French, and American — and some of its traditions have survived and evolved through millennia. Mexico City is the great collector of these cultures. Here, they arrive from the States and Pueblos to be transformed into something new. Bold thinking is brought to the old ways in food, drink, design, and art. The younger Mexican generation, with both its forward-thinking global perspective and interest in country’s past riches, is rediscovering, recuperating, and reshaping the traditions that have come before it.

The seating area at Blend Station is like wandering into a sunny forest clearing as a tree dominates the white, minimalist space. People spend hours lounging here with friends or working. But of course, the coffee is good, too, and crafted in the method of your choice. They specialise in blends, with new ones appearing every day. Their bean obsession dips into experimentation with fermentation and ageing in rum and bourbon barrels. For the peckish, Blend Station’s all-day menu leans heavily on toasts and English muffins.

Although wine has been made in Mexico since the 16th century — with a 120-year prohibition thrown in there — it’s still considered a young tradition. La Contra shows off the best of this burgeoning vino alongside beer and mezcal. Dreamed up by wine-maker Hugo D’Acosta and his wife Gloria Ramos, La Contra features many of the various and idiosyncratic projects that D’Acosta — one of the most influential people in Mexican wine — is involved in alongside his colleagues’ bottles. The P125 entry line is aimed as a gateway into Mexico, featuring various blends that give a taste of Mexican terroir. There are often tastings with visiting winemakers at the more spacious Coyoacán outpost, but their nook of a shop in Roma Norte is more than enough to satisfy the curious.

Amaya, like the best wine bars, takes its wine and its food both seriously and playfully. The labels of chef Jaír Telléz’s family-run vineyard, Bichi, feature colourful cartoon portraits of masked lucha libre wrestlers. Natural wine may be de moda in the rest of the world, but it’s still a novelty in Mexico. Collaborating with French-Chilean winemaker Louis-Antoine Luyt, the Telléz family crafts interesting bottles from old, recuperated vineyards of heirloom grapes — their Pet Mex sparkling even made from an as-yet unidentified varietal. The same ethos of this ‘naked’ wine (bichi means naked) complements Telléz’s satisfying Baja California cuisine. Check out the monthly Mesa B pop-up in the restaurant’s cellar for the ultimate pairing of wine, food, and conviviality.

If you have a great coffee at any of Mexico City’s top restaurants, there’s a good chance it’s Buna beans. While primarily a wholesaler, Buna has a tiny counter outpost tucked in beside the sleek concrete cave of Italian restaurant Sartoria. Order a well-crafted coffee and lounge on the terrace, or grab a bag of their beans. They work directly with small-scale Mexican coffee producers in implementing better farming techniques and sustainability practices in the country. Their distinct branding is particularly interesting as well: each coffee is personified, and each coffee personality has a flavour profile, allowing Buna flexibility year to year, bean to bean.

Founded by the duo of Joana Valdez, a Mexican industrial designer, and Karim Molina, a Venezuelan textile designer, Ayres MX melds their modern sensibility with the traditional knowledge of wood and stone artisans throughout the country. Their designs result in new iterations of what has been traditionally made in these communities and provide a fair income for these skills. Lava rock and marble are hewn into stunning bowls, trays, molcajetes, and vases. Timeless wood plates and spoons from Yucatán. Newer designs incorporate leather and textiles. Visits to their showroom are by appointment only.

Basket weaving is one of the oldest crafts in Mesoamerica, stretching back long before the Spanish arrived. Founded in 2002, Makaua works with families in the mountain towns of Guerrero to create a line of palm fibre baskets, bags, placemats, and rugs. There’s a modern sensibility of simple colours paired with natural palm fibre, including leather accents and handles on some pieces. The palm is sustainably harvested, with only the mature leaves collected, and then hand weaved. A large part of the company’s ethos is supporting families in need. Over 500 such families have been involved over the years.

Mezcal, that eccentric spirit distilled from many varieties of agave, may be in every bar in Mexico City, but despite the boom it’s still hard to find the best stuff. La Clandestina wasn’t the first mezcal bar here, but it is one of the best. The menu features small batches sourced from mezcaleros across the country — mezcal is not just from Oaxaca — as well as their own brand made in a sustainably designed palenque. Oaxacan food like tlayudas can be ordered from their restaurant next door. Sister bar, El Palenquito, located down the street, is smaller, but a cosy atmosphere comes from its rustic decor, which was salvaged from parts of their 100-year-old palenque.

Mezcal neophytes need a guide. For those whose main impression of the spirit is that it’s smoky, owner Omar Trejo is all too happy to expand minds to the diversity of flavours contained in artisanal mezcal. This is an outpost of the family-owned Oaxaca shop that works directly with mezcal producers, with particular attention to those who contribute to their communities and offer a distinct and transparent mezcal. Omar can talk forever about the world of mezcal, and he insists on tasting as much as possible to discover one’s likes before walking away with a bottle (or two).

In pre-Hispanic cultures, chocolate was currency, more valuable than gold in some cases. Not anymore. In fact, quality chocolate is hard to find in Mexico. But young chocolate-maker Daniel Reza Barrientos is trying to change that. He sources cacao beans direct from farmers in southern Mexico and transforms them into a medley of drinks, pastries, and bars. The line of 70 per cent cacao bars demonstrates the diverse flavours of different beans and areas, each with its own single origin story. Daniel also offers mezcal and chocolate tastings, and runs workshops on how to make chocolate from bean to bar.

There’s perhaps nothing more central to Mexican food culture than corn. The country turns an infinite variety of heirloom seeds into countless delicious expressions. When Enrique Olvera moved Pujol to its new location, there wasn’t a place for the corn mill. So, he opened up this small location to celebrate the staple food. Designed as a grab-and-go spot, Molino El Pujol offers four colours of tortillas, a tamale and atole drink for breakfast, and an avocado taco for lunch, as well as an elote cob slathered in a coffee mayo sauce and topped with a powder of chicatana ants.

The founders, Mónica Manzutto, José Kuri, and Gabriel Orozco, first conceived Kurimanzutto as a nomadic gallery to promote Mexican contemporary art around the world. Without a physical space, they were able to innovate and play with normal methods of presentation. Then, in 2008, they built their current home in a 1949 building that was previously a lumberyard and industrial bakery. The renowned architect Alberto Kalach transformed the space into an airy exhibition hall while preserving the original wooden beams. Currently, Kurimanzutto represents 34 national and international artists, giving them a platform within Mexico, and the world. 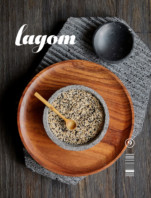 We feature in a city guide in every issue of our printed magazine. This one first appeared in Lagom #9, which is still available to purchase from our online shop.