Coffee shop, coffee roaster, and… architecture studio? It’s all in a day’s work for coffee-loving architect Ole Marius Skjærseth, whose combination of work and play has helped ignite a passionate coffee scene in one of Norway’s most beautiful cities.

The pairing of a coffee shop and a coffee roastery is quite the winning combination — if you’ve ever walked into a café like The Barn in Berlin, or Sightglass in San Francisco, you’ll know that the arresting sights, sounds, and smells of roasting coffee make for fantastic foreplay while you wait for your brew to be made. But at Kokko, in Norway’s picturesque city of Stavanger, a third and seemingly unconnected component forms part of the equation: an architecture studio.

This unique, three-pronged business is the brainchild of Ole Marius Skjærseth, a Stavanger native whose career in architecture melds perfectly with his passion for coffee. And, being an architect afforded Ole a luxury most of us don’t have: to be in complete control over how he wanted to build his business. Quite literally. “I’ve always been interested in coffee,” he says. “But I like viewing the coffee shop as an urban concept, if you will.”

Kokko opened its doors just under two years ago, but has its origins in a bouldering accident two years prior that took Ole off a new-build villa project, for which he had moved back home to Stavanger from Trondheim, where he studied. In need of some recovery time, Ole decided to stay in Stavanger and found himself in need of an office. The former house that would eventually transform into Kokko became available and, although its status as a listed building proved difficult — at one point having its entire facade removed to get the roaster onto the second floor, and needing the whole roof changed to install windows on the top floor — Ole designed a new interior that could accommodate a meeting room and showroom on one floor, an office space and room for roasting on another, and two floors for the public-facing coffee shop. Through a glass window in the café’s ceiling, it’s possible to look up and see the roaster on the next floor.

I wanted to make a space where people could find inspiration. A space where architecture could be made to feel more accessible.

Bringing the public into his domain might seem like another not-particularly-logical choice, but for Ole, it was a way of welcoming Stavanger’s coffee-lovers into his ideal office. “I wanted to make a space where people could find inspiration,” he explains. “A space where architecture could be made to feel more accessible.” The lower floor acts as a gallery of sorts, showcasing books and magazines loved by the staff. But actually the entire space is a showcase: every item of furniture is for sale, numerous household goods are available to purchase and, of course, Kokko is something of a showroom for Ole’s own work — multiple clients of Kokko-the-architecture-practice started out as customers of Kokko-the-coffee-shop. And for all of this to work, Ole employs shop manager Solveig, roaster Brigette, and a talented team of baristas. He also shares his office space with carpenter and frequent collaborator Felix, who was a crucial part of the actual building of the interior.

Despite the Nordic region’s reputation in the coffee world, and highly regarded roasters such as Tim Wendelboe in near-ish Oslo, there was almost no speciality / third wave coffee scene in Stavanger when Kokko first appeared. Now, the city boasts several excellent cafés. But Kokko still remains unique: “Having a roastery in the same building, and in the city centre, is something a bit different,” Ole explains. “Plus, we have the control over the whole product.” That control and dedication to quality has led to Kokko selling beans beyond their own space: “We’ve started to sell our beans to other coffee shops and restaurants,” Ole says. One of those just happens to be the Re-Naa, one of Stavanger’s Michelin-starred restaurants.

And, as more and more lifestyle brands are beginning to showcase and sell their wares in the shop — “I was really happy when we managed to incorporate Fredericia Furniture, who are one of my favourites,” Ole enthuses — the founder’s vision of combining architecture with coffee and design as a whole continues to cement in the minds of Kokko’s customers, clients, and visitors. But Ole’s vision is more than just an unusual combination of practices; it’s a perfect example of how combining one’s work with one’s passions can result in something that is infinitely greater than the sum of its parts.

Visit Kokko at Østervåg 43, 4006 Stavanger, Norway, or online at kokkokokko.no 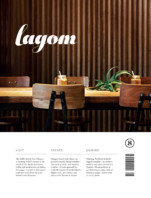 Read this story and more in the print edition of Lagom #8, which is available to buy from our online shop and in real-world shops all over the globe. There’s nothing quite like the smell of print — or the feel of our 300g, foil-blocked, soft-touch laminated cover!