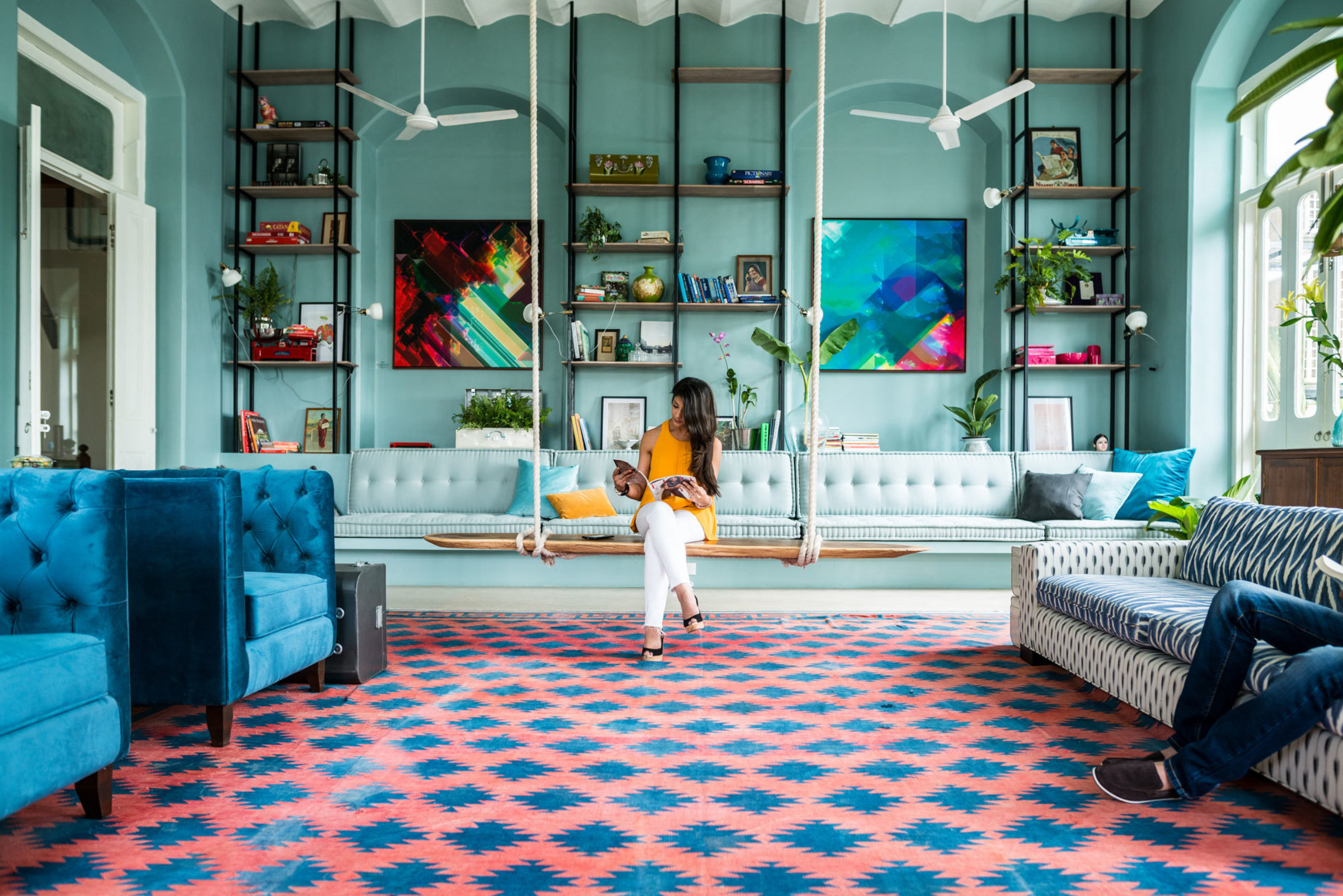 Earlier this year Ministry of New was named number two of the ‘5 Most Beautiful Coworking Spaces in the World’ according to Forbes.

That’s quite some accolade, especially considering the decision was made after looking at 4,000 coworking spaces across 105 countries. But looking at the space, it’s little wonder it was awarded this title: awash with hues of blues and greens, and furnished with natural fabrics and plenty of plants, Ministry of New must be one of the few coworking spaces that feels like a sanctuary from the bustling world outside — a space to come and clear your head even, rather than an office you’re keen to leave at the end of the day.

Furniture and decor has been sourced from nearby bazaars — such as the antique chandelier in the library — embracing and celebrating the local culture and heritage.

Ministry of New's large windows look out over beautiful historic buildings of the surrounding Fort district. The area itself is the commuter destination for a mix of lawyers, journalists, designers, artists, entrepreneurs, and corporates. It's also home to the high courts, and the Times of India Headquarters.

But being surrounded by grandeur and being elegant in its appearance doesn't mean this is a workspace you'll feel intimidated by or looked down on when you step inside: its atmosphere is also deliberately homely. This is quite intentional, and in fact owners Marlies Bloemendaal and Natascha Chanda literally brought their own personal objects from their homes into the space order to give it a more comforting and relatable feel, and to continue the sense of calm that is a draw for so many.

Ministry of New currently has 12 teams and around 100 individual members, with people coming from a variety of backgrounds, from the highly technical to the extremely creative. There are teams from rapidly growing social enterprises, The Financial Times, and even a senior scientist who consults for NASA and spends his work days analysing the rings of Saturn, bringing his telescope to work to share closer views of the universe with fellow members.

Popular to members, some of whom travel two hours a day to be at the space, Ministry of New has also been a popular space for brand collaborations. H&M chose to do their press launch event at Ministry of New when they entered the market in Mumbai. Other brands who have held workshops or visited the space include notable companies as: Sequoia Capital, Bobbi Brown, Leo Burnett, Discovery, Tata, Christian Dior, Colgate, AirBnB, Titan, Lakme, Myntra, Saatchi & Saatchi, Excel Entertainment and CitiBank.