Sebastian Mullaert has lent his name to countless techno compositions, all created in his cabin studio deep in the Swedish woods. We visited Sebastian and discovered his passion for being present in the moment, aided by nature and a desire to inspire presence in others.

Nestled in the Swedish countryside between the outer reaches of a small village outside Malmö and the edge of a sprawling forest, there sits a wooden cabin.

A man stands inside, surrounded by a vast collection of music-making machines big and small. Many are synthesisers, sporting keyboards, knobs, and faders; some are small effects pedals connected with multicoloured cables; others are sought-a er analogue machines that de ned a generation of electronic music; all of them boast LEDs that flicker, pulse, and jump, moving forward through a sequence and then back to the start and then forward once more. The loops repeat and repeat and repeat, gradually evolving and mutating in the most hypnotic of ways.

Pulsing to the beat and immersed entirely in this intoxicating wall of sound is the man, who elegantly slides from device to device, artfully twisting a knob there, gently moving a fader there.

This man is Sebastian Mullaert — one of modern techno’s true legends. Although perhaps best known as one half of the currently-on-hiatus Minilogue, his name has appeared on countless records, from original compositions to collaborations to remixes. His recent work, released under his Wa Wu We pseudonym, uses track titles such as ‘A1’, ‘A2’, ‘B1’, and ‘B2’. If this sounds like an exercise in musical purity, it is. And it all makes complete sense the moment he and I start talking.

Sebastian’s studio’s location is not only about being close to nature — the village itself, where he also lives, plays an important role. “This village is very special and unlike most Swedish villages,” he explains.“A large variety of people live here: artists, agricultural workers, academics who wanted to move out of the cities. There’s a lot of social activity. We have companies that are run and owned by the whole village. They take care of the houses, the restaurants, the art houses. People practice yoga and meditation. We have a lot of different, very interesting, and forward-thinking projects. So it’s a very special place to live, and not only for the nature — although it’s the nature that attracts people in the first place.”

To move to music connects you to the moment. I believe it brings people back to the present. You’re not thinking and analysing — you’re just letting expression take place.

The studio itself looks unassuming from the outside, but inside its construction is as impressive as the plethora of instruments it houses. Certain panels are mobile and can move to open the studio up to the scenery beyond. “Originally I built the studio myself with the help of a local carpenter,” Sebastian tells me, “but we’ve since rebuilt it — we just kept the structure and rebuilt everything with really thick walls.”

The ceiling looks like a giant game of Tetris, frozen in time as the wooden blocks threaten to descend. They’re for the acoustics, of course. “I found an acoustic engineer — the best I could find — and he made all these sketches for how I needed to rebuild the whole studio inside. I had a carpenter rebuild everything and now the sound is amazing. It’s a huge improvement.”

Both blessed and cursed with this new awareness, Sebastian realised how his new speakers and new space were able to represent hitherto unheard frequencies. “I love minimal music, so I enjoy myself not only when I’m playing an instrument, but also when I’m just listening to frequencies. I feel blessed with the frequencies that are in these synthesisers.”

It’s clear that the natural world surrounding Sebastian’s studio cabin plays a huge part in his deeply spiritual approach to creativity. Before work every day, he takes an hour-long walk through the forest and says that, “the inner feeling of just being is so present in the forest. Nature, animals... they’re just themselves; they’re not trying to be something else. That’s something I can connect to.”

I put it to Sebastian that the tranquility of the forest is in stark contrast to playing his music in the heaving clubs in cities all over the world. Without hesitation, he offers an explanation that they are, perhaps, the same. “One thing that amazes me about dance culture is that people are actually active in the creative process when they go to a concert, or a DJ gig. They’re expressing themselves on the dancefloor. I know that most people in the audience are not aware of it, but they open themselves up when they’re dancing for hours. To move to music connects you to the moment. I believe it brings people back to the present. You’re not thinking and analysing — you’re just letting expression take place.”

He goes on to say, “what you experience is different if you’re in a big, dark club, or in a sunshine-drenched forest, but it’s the same ‘beingness’; you can connect to yourself and the place where everything is experienced.”

Sebastian explains that this is also how he sees meditation — literal meditation — and enthuses about his life as a practising Buddhist. “In Buddhism, you can’t truly have a sense of being present without taking into account both the physical and the mental. There can’t be a present moment without consciousness, and every conscious moment is also an expression of the physical and mental universe at the same time.

"The similarity between being in nature, or meditating in my studio, or playing a synthesiser by myself, or standing in a club is that they’re all potential tools to connect to the inner being, the consciousness, the true self, or whatever name you want to call it.”

Creating music in this tranquil setting — with the option of pausing for a spot of meditation, or a walk through the woods, at all times surrounded by nature — is an enviable position to be in. I ask Sebastian what he might suggest to those who are stuck in more urban environments, so that they might attain this same sense of being present to fuel their creativity. He says that we should be wary of believing that there is only one way to do it.

“I try not to tell people what to do. I find it weird when someone goes to another culture — like when Western people go to India and learn yoga, or go to Japan and learn Zen Buddhism — and then try to place that spirituality on top of a life that involves an 8am to 5pm working day, with children, living in cities like London. It’s wonderful to be inspired and to share things that can help you, but to simply place a concept onto something else is not always good. It’s about finding the way that works for you to get yourself into that moment.”

Sebastian suggests that where we live for our first 10 or 15 years is of great importance in terms of what inspires us and allows us to become present. “When you play, you dance, you meditate — people return to themselves, or get in tune with creativity, or a meditative flow. For me it’s never a new experience. It’s always a kind of memory: ‘Ah, yes, this is how it is. Now I remember.’”

He continues: “Almost everyone has been connected and really felt this present moment in their life. Some people do it through drugs or peak experiences. Maybe they get hooked on skiing because they feel so present and alive when they do that. But children experience it naturally. When you have these strong moments of being present, when you return to that setting, or there’s something in the setting that reminds you of it, you remember what’s important — what’s meaningful in life. For me, that’s what the forest does. I was in the forest so much as a little boy, so when I’m here I return to that, and I feel the simplicity of it. It doesn’t need to be any more than this.”

There’s no doubt that the forest is the perfect setting for Sebastian and his beautiful, eclectic, and spiritual cabin studio. Hearing him talk with such passion about this place and his attitude to life is invigorating. His enthusiasm is infectious and, listening to his music after our conversation, it might just be possible to experience that same sense of presence felt by Sebastian in this little studio in the Swedish woods. 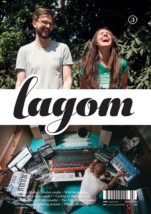 You can read this article in full, as well as many more stories of creation and inspiration in Lagom #3, available as a digital download and in print.