Web designer and Dribbble co-founder Dan Cederholm talks about how picking up a banjo helped him to combat anxiety and how he now uses it as a way of escaping from the stresses of the day-to-day. And if you think the banjo looks hard, ‘clawhammer’ might just change your mind.

How did you get into playing banjo?

When I was a teenager, I wanted to learn how to play banjo, so I bought one and a book on the Scruggs style because I didn’t know of any other kind. I tried to learn — I’d taught myself guitar and was relatively proficient at it — but with banjo, it’s a totally different way of playing. Each of your three picking fingers have to move independently. It’s extremely complicated and probably not a good thing to learn just by picking up a book. I ended up losing my first banjo to a friend who borrowed it and never gave it back, but I still maintained an infatuation with it. Maybe six years ago or so I had a real desire to play again, but this time I wanted to learn how to play it for real.

At the time, I was pretty stressed out, dealing with an anxiety diagnosis, and trying to look for a lot of different things to help me relax and decompress — something that had nothing to do with computers; something completely different that could take my mind off everything while I was doing it.

Drums were my main instrument, but they’re really difficult to play, especially in a house full of young kids. A banjo is much easier to pick up when you’re just lying on the couch. I also longed for something new to learn, and I wanted to learn something different outside of design.

So I got a banjo again, and I thought that I was going to have to learn the three-finger style because I thought that was the only way to play, but after watching some YouTube videos by an amazing banjo teacher here in Salem named Tom Collins, I quickly realised that he was playing a completely different style to the Scruggs three-finger style. He was playing in a style called ‘clawhammer’.

The days where I can fit banjo in are usually pretty good mental health days; it’s like my meditation.

Clawhammer is the way most people played before Scruggs came along — it’s almost like a punk rock style of banjo. Learning how to play clawhammer opened the floodgates to this whole other world of what’s called ‘old-time music’, which is pre-bluegrass, and heavily influenced bluegrass. It’s a world I had no idea about. Some of the tunes make their way into other areas of bluegrass and folk, because they’re old and passed down orally.

There are rare and wonderful recordings of them, and much of them are just families getting together and playing songs they’ve been taught. Eventually there are 20 different versions of the same song which are all different, which is amazing. I got totally sucked into this world of old-time music.

You said the original reason you picked it up was because you were fascinated by it, but also that you were looking to find something to relieve anxiety and get you away from work. Has that continued to be the case?

Absolutely it has. In fact, the days where I can fit banjo in are usually pretty good mental health days; it’s like my meditation. I think that’s partially because it’s just me and the banjo, and also the repetitive nature of the music, especially with old-time tunes. A lot of it is pretty droney, which I think helps in terms of being able to zone out a bit on it; you’re not really thinking about anything else.

You need balance in your life, and something that takes you away from the stresses of whatever else is going on — which can be a lot of different things for different people.

Do you find any kind of specific times when you feel compelled to go and pick up the banjo, such as during stressful periods?

I think it’s more preventative in nature. If I make a point to in the morning get in a bit of playing, even just 10 minutes, that helps. It becomes a good weekend thing to do, too. If there’s a lazy Sunday where I wake up and the kids are around, I can easily pick up the banjo and start writing something, which also helps a lot.

So you think it’s a case of making the time to play in order to set you off right for the rest of the day?

That’s exactly it. It’s not something I schedule time for, per se, but I at least consciously make time for it. And when I do, I’m always happier for it, even if it’s literally a just a couple of minutes.

Do you think that creating music is essential to being present in the moment and escaping your stresses? How is it that the creative process — even if it’s just noodling away — is different from simply listening to music?

It’s definitely different. In fact, I love music so much that I almost have difficulty listening to it. You’d think I’d have it on all the time throughout the day, but I can’t because I get sucked in completely. I have trouble concentrating on anything else, unless it’s a certain type of music more suitable to being played in the background.

Because of that, when I play music, I really give it my all. I’m at a comfortable place because I know this is what I’m going to concentrate on now. That helps, just being in the moment, for sure. The creation of music... that’s always been something I’ve loved to do; just making up music, even if it’s terrible.

If I’m listening to music but trying to do something else, then the something else doesn’t get my full attention. Whereas, if I’m playing music — and creating it — then I’m really all in. I’m committed to being in the moment. 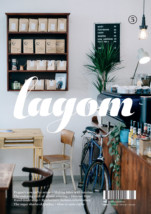 You can read our full interview with Dan, and of course much more, in Lagom #5.