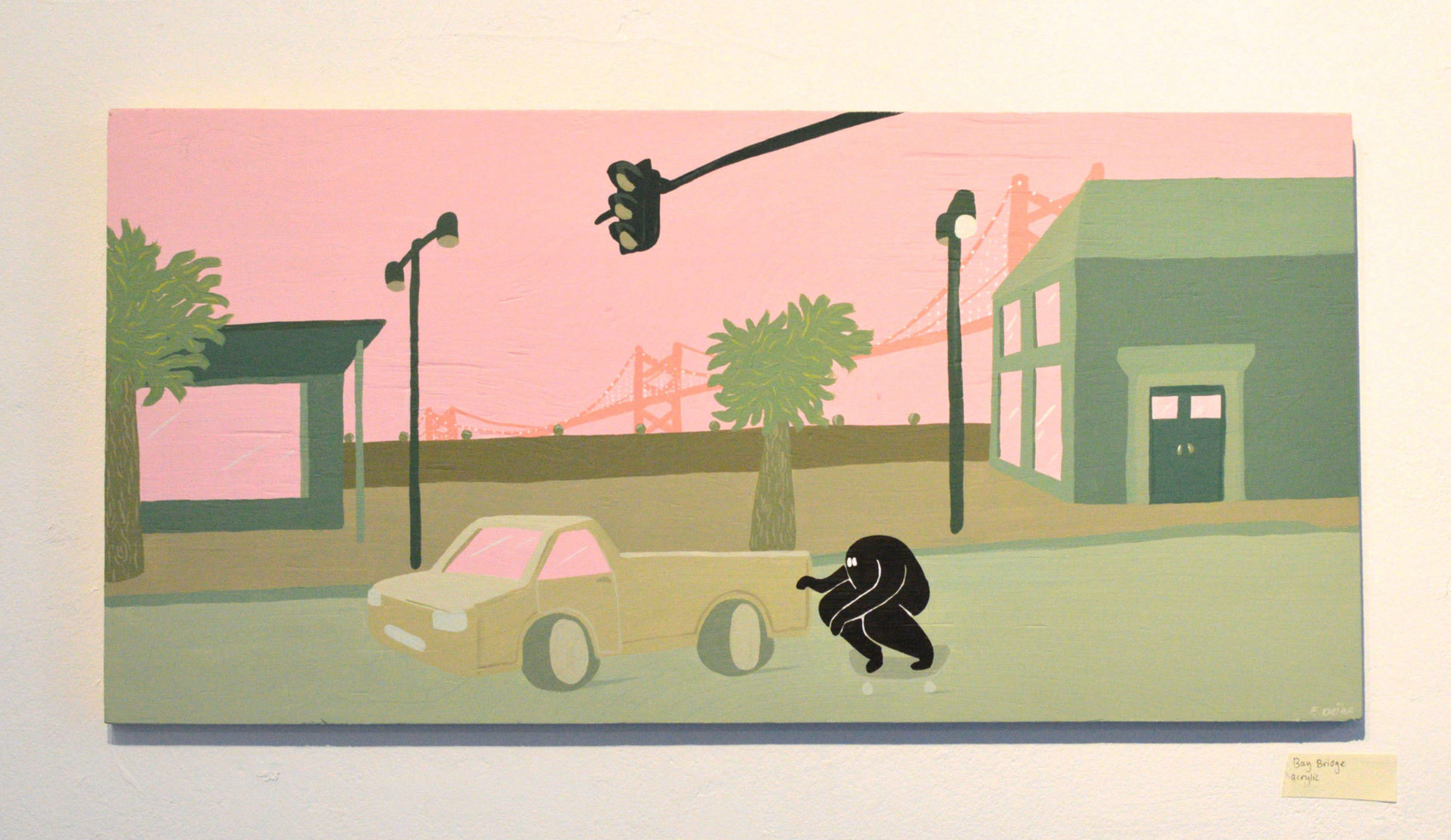 Working as a freelance illustrator is never going to be smooth sailing, but with a city overflowing with creativity, Eloise Dörr immersed herself in London’s teeming artistic community and developed her style into something relatable, recognisable, and radical.

Flaunting a long list of collaborative and independent exhibitions, Eloise has experimented with all manner of artistic media. Be it animation, illustration, or painting the broken decks of her skating comrades, she colourfully celebrates the makes and breaks of modern skateboarding culture.

We brushed shoulders with the girl behind the canvas to talk about creation and inspiration.

First and foremost, how did it all start?

I can always remember having a sketchbook since I was about five years old or so. I loved to paint with watercolour when my family and I would go to the countryside on holiday in France and Germany. Painting and drawing has always been in my system.

Which art do you identify with the most? Is there a certain artist that directly inspires your work?

I tend to go through phases of being inspired by a certain artist at a certain time. Monet and Toulouse-Lautrec were a massive inspiration to me around three or four years ago. The whole impressionist / post-impressionist era had a large influence on my art for a while. David Hockney has been and still is a huge inspiration to me — you can see a lot of direct links to his work in my own. I think when I’m going through transitional periods in my life, I tend to live through another artist. At this time, I guess it’s Hockney.

What made you chose skateboarding as a recurring theme in your work?

The link between art and skating in my work was very organic. When I was 16, I left school and it was a very empty time where I just had art to fill my days. After a while I discovered skateboarding, so I had these two things that gave me so much life. Putting them together just felt so natural.

Talk us through the ‘silhouette character’ motif that appears in a majority of your skate-based pieces.

Before I started skating, I was just doing pencil drawings, still life and realism-based stuff. I didn’t have a huge imagination, I just liked drawing. After I started skateboarding, it was like a switch turned on in my head, and I instantly wanted to start experimenting with different styles. When I was sketching humans skating, it felt limited in the way of movement. I couldn’t mould their arms and legs to how I felt they would look better, as it just ended up looking weird. I started to draw stick characters, moulding them however I wanted. The characters began to change shape until they ended up how they are today.

What’s the worst thing about working as an artist?

It’s quite cliché, but artist’s block. For years, I didn’t have artist’s block and I thought I was completely cured of it. I think that’s because I had all the time in the world for both skating and drawing. Nowadays I don’t have as much free time, so my imagination sometimes struggles. The second worst thing is people not wanting to pay you to do a drawing for them – because ‘I just like doodling, so why do I need money’, right?!

What are you working on at the moment?

I’ll soon have a board coming out with my number one favourite skate company, so I’m super excited about that. Watch this space!  I’ve also been working with Free Movement Skateboarding, developing a board design. Free Movement is a skate charity whose work is about empowering refugees in Athens. It’s an amazing charity.

Are there any avenues of art you'd love to explore more of?

Sculptures have never really made me feel anything, and I’ve never really seen a sculpture that I like, but I’d love to start making my characters and their environments into sculptures, maybe out of fibreglass.

Anything you want to say to budding paint-thusiasts?

Find the thing that fuels your imagination, and don’t ever stop fuelling it!